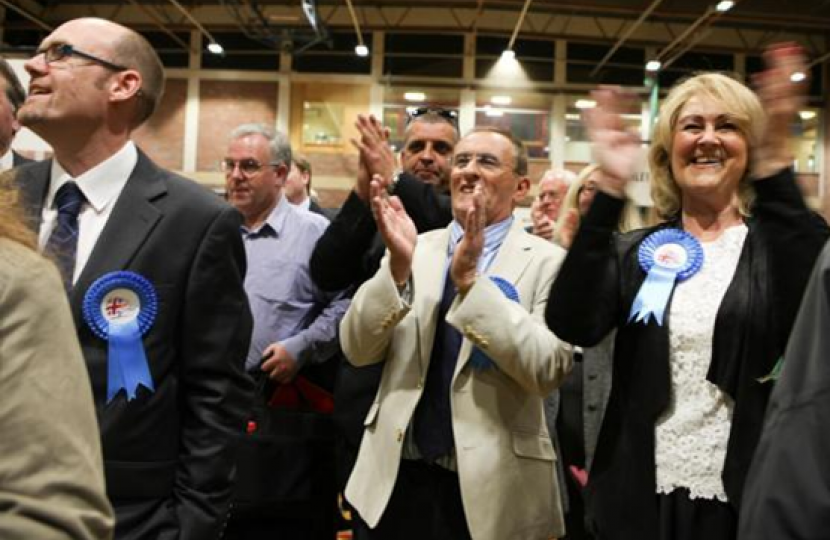 I hope that you have recovered from the euphoria of May 7th and the incredible election results. It was a momentous day and one of which we can all be proud. David Cameron won the General Election decisively and is returned to Downing Street with the first Conservative majority government since 1992.

Julian was returned with 56% of the vote and an increased majority of 19,162, achieving a further 3.4% on his share of the vote from 2010. After five years in government with some bitterly unpopular decisions having to be made, this result was incredible. Delightfully the Lib Dems lost over 20% of their vote and came a very poor fourth behind Labour.

Southampton Itchen, with who we were charged to give mutual aid and 4th on the Conservative target list, was won resoundingly by our good friend Royston Smith. Eastleigh too, much to the surprise of many, was won in a ‘blue wave’ that swept Hampshire and left only Southampton Test in the hands of a party other than the Tories.

On the District Council we gained two seats from UKIP and four from the collapse of the Liberal Democrats, giving the Conservatives 58 seats out of 60. At the Local Elections we took almost 53% of the popular vote, another significant achievement. We Conservatives were the only Party able to field a complete slate of local election candidates across the District. We contested each of the 60 seats, UKIP put forward 28 candidates, Labour 23, the Greens 13, and the once strong Liberal Democrats only managed a poor 22. Every election since 1999 when we took back control of NFDC from a disastrous Liberal Democrat administration, we have increased our share of the vote and our number of seats. I am thrilled that not only have we firmed up the Conservative vote in areas that had previously been staunchly Liberal Democrat, we have also made significant inroads in areas previously unsympathetic to the Conservative cause.

The UKIP threat also dwindled as people realised the importance of their vote, however UKIP are now in second place in the majority of seats.

We owe a debt of thanks to the tireless efforts of our local Party membership who delivered countless  leaflets and who so kindly gave financial assistance to the Association. The result nationally, as well as locally, is a testament to the hard work and support of all our members.