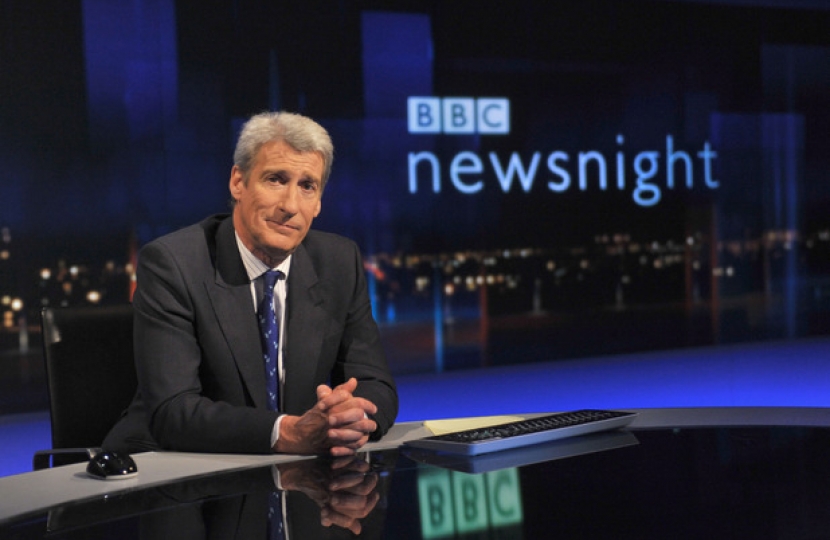 Paxman, who made his last appearance on the flagship BBC programme earlier this month, said the makers of the programme were still young idealists, wanting to "change the world".

He added his experience in politics had led him to be a "one-nation Tory", with youthful idealism being a "fools' errand".

Speaking at the Chalke Valley History Festival, about his book on the First World War, he answered questions from the audience about his memorable tandem bike ride through the streets of London with Boris Johnson, which featured on the final programme.

Footage broadcast on Newsnight saw the Mayor of London call Paxman the "last" one-nation Tory working at the BBC.

"I have to be frank, I suppose I am a one-nation Tory, yes," Paxman admitted. "Look, Newsnight is made by 13-year-olds. It's perfectly normal when you're young that you want to change the world.

"The older you get, the more you realise what a fools' errand much of that is and that the thing to do is to manage the best you can to the advantage of as many people as possible."

Paxman, who has had to be politically impartial throughout his journalism career, added of the interview: "It's complete b------s, of course, typical Boris."

On the question of whether he truly was the last Conservative at the BBC, he began to answer before stopping himself.

"If I had to...are there any members of the press here?" he said, at the sold-out event. "I think I'll plead the fifth on that one."

His comments may be viewed by critics of the BBC as giving an insight into recent years at Newsnight, which has been plagued by mistakes made during the Savile scandal and accusations of "dumbing down".

Paxman's latter encounters include an interview with comedian Russell Brand, while his colleague Kirsty Wark performed a dance to Michael Jackson's Thriller and Emily Maitlis interviewed the Cookie Monster.

Paxman, the only 'One-Nation' Tory at the BBC

Its new editor, Ian Katz, joined from the Guardian newspaper a year ago.

The public event also saw Paxman share his opinion of modern politics, saying: "I am in favour of governments getting out of people's lives. Particularly foreign government.

"The closer you can take decision-making to the people affected by those decisions, the better."

Europe, he said, had been the source of "nothing but trouble for us", and joked Belgium as a "pointless little country".

When asked if he had relaxed his rule about never drinking before a show for his final appearance, he said: ""No I didn't have a drink beforehand, but perhaps I should have done."