Member of Parliament for New Forest West
Desmond Swayne was born in 1956 and was educated at Bedford School and St Andrews University. He was a school master from 1981 to 1987 and a manager with the Royal Bank of Scotland from 1987 to 1997 when he was elected to Parliament for the New Forest West constituency. He has been a serving Territorial Army officer since 1987 and served in Iraq from July to December 2003. During this service he contributed a popular audio diary to BBC Radio Four. To keep fit, Desmond swims a quarter of a mile in the Serpentine daily throughout the year when Parliament is in session. He also runs through the New Forest between his home and Brockenhurst station to catch the train to London. He married Moira in 1987 and has three children. The family lives in the New Forest.

Previously, he held shadow ministerial portfolios for Northern Ireland, Health and Defence and was a senior opposition whip. In the 1997-2001 Parliament, he was on the Social Security select committee. Prior to his election in 1997, Desmond contested the Parliamentary seats of Pontypridd in 1987 and West Bromwich West in 1992. He also contested a district council and a county council seat in the West Midlands, and a London borough seat in North Kensington.

Campaigning on...
Desmond has been an assiduous constituency MP. He held weekly surgeries and has established an enviable reputation for the speed at which he turns round constituents' correspondence, a diligence he maintained during his service in Iraq by using the latest technology available. He has been very effective at raising constituency matters in the commons with ministers and securing debates on the issues affecting the New Forest. For example, he has held ministers, including former Prime Minister, Gordon Brown, to account on the problems of policing in the New Forest; the lack of dentists; the unfairness of the planning system and many similar issues, in addition to raising the plight of individual constituents when this has been necessary. 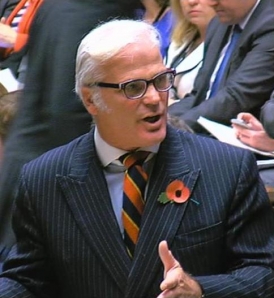