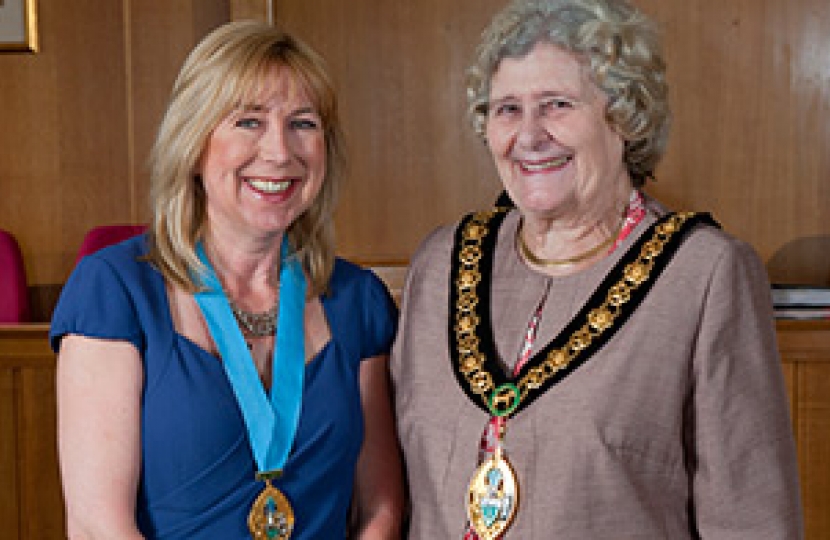 Councillor Maureen Holding (pictured right) has been elected the new chairman of NFDC and was handed the chain of office at the annual meeting of the council on Monday 19 May. Her vice-chairman is Councillor Alison Hoare.

Cllr Holding said: "I am honoured to be chosen as the chairman of the council. I will do my best to fulfil this role to the best of my ability and look forward to meeting people throughout the New Forest and Hampshire, the Isle of Wight and Dorset."

For the first time in many years both the Chairman and Deputy Chairman of NFDC are both from our very own Association! Maureen Holding and Alison Hoare will prove formidable in their respective roles and will represent the New Forest area with great distinction.

During her civic year as Chairman, Cllr Holding will raise money for the Hampshire and Isle of Wight Air Ambulance and the Nalder Benevolent Trust. The Nalder Benevolent Trust is run by Brockenhurst Parish Council. "Miss Nalder lived in the village and when she died she left her house to the parish to help people in need of affordable accommodation who are over 55," explains Cllr Holding. The council sold the original house to provide four affordable flats, which are let to local people. "The Trust does a very good job and the scheme also helps NFDC's waiting list, sometimes freeing up council housing for families when our residents downsize. I'm looking forward to helping the Trust continue its work."

We wish Maureen and Alison all the very best over the next year.

Outgoing New Forest West Conservative Chairman, Cllr Christine Ford, raised just under £2800 for her charities (Hampshire and Isle of Wight Air Ambulance and the Young Firefighters Association at Ringwood), £1271 of which was raised from her recent charity dinner on 1 May.

Find out more about Cllr Holding and Cllr Hoare

District councils are required by law to elect a chairman each year. He or she is elected by all members of the council. The chairman will not necessarily be a member of the majority political group on the council. He or she chairs full Council meetings and in this role is expected to be totally impartial.

As the council's civic head, the chairman welcomes members of the Royal family when they visit the district, receives dignitaries and other visitors, hosts civic functions and attends numerous local events, large and small.